On 23 September 2020, the ceremonial roll-out of the PIKO garden railway diesel locomotive BR 106 of the DR took place on the grounds of the Sonneberg engine shed in cooperation with the Eisenbahnfreunde Sonneberg e.V.

During this event, the PIKO model of the G Scale diesel locomotive BR 106 was presented for the first time to the attending guests from politics, media and trade. As a complete form novelty, it is this year's highlight of the Sonneberg model railway manufacturer in this gauge size.

With the support of the Pressnitztalbahn, the Erfurter Bahnservice, the Erfurter Gleisbau as well as the Thüringer Eisenbahn, 4 original locomotives of this series, which are still in active service today, were shown and the invited guests were able to see for themselves how the new PIKO model has been realized in direct comparison with the large locomotives.

The four-axle, diesel-hydraulic shunting locomotive, designated as class 106 since 1970, was initially used as class V 60 by the Deutsche Reichsbahn for medium-heavy shunting service.

This makes the BR 106 one of the most frequently built standard gauge locomotives in Europe. The shunting locomotives were not only used at humps, but also for short goods train services and in construction train service. Individual locomotives were used for contact wire control, whereby an electrically non-functional pantograph was mounted on the roof of the driver's cab.

To this day, these virtually indestructible workhorses are still in daily use by many private railway companies in East and West Germany and perform their services reliably.

Because of its aging, yellowish paint, the BR 106 was nicknamed "Goldbroiler" ("fried chicken").

With the BR 106 model, PIKO offers another DR classic and thus meets the wishes of many garden railroaders.

This fine and robust model is convincing by its high reliability, ball bearing mounted wheelsets with finely profiled spoke wheels, separately mounted horn and radio antenna, engine, cab and driver's desk lighting as well as a driver's cab with the already well-known locomotive driver. Many separately applied details such as handle bars and windscreen wipers round off the attractive appearance of the shunting locomotive.

The model is prepared for easy retrofitting of a digital decoder and sound.

The first delivery of the models to specialist dealers will take place at the end of September. The non-binding recommended retail price for the PIKO model of the BR 106 is € 550.00. For the digital sound version the RRP is € 700.00. » The model in the PIKO Webshop

Since PIKO entered the market of garden railway locomotives and carriages in 2006, the Sonneberg-based model railway manufacturer has developed into a full-range supplier in this gauge size and offers a complete range of locomotives, multiple units, passenger and freight cars, its own track and digital system as well as attractive building models, all of which are produced at PIKO's main factory in Sonneberg, southern Thuringia.

In addition to the garden railway, PIKO has 3 other track sizes in its portfolio: H0, TT and N.

The PIKO group of companies currently employs more than 600 people in sales and production companies worldwide. In addition to the main factory in Sonneberg, where 173 people work, the group also operates its own production facility in southern China, where 420 PIKO employees work.

In his speech, PIKO owner Dr. René F. Wilfer also referred to the extremely positive business development of the Sonneberg-based model railway manufacturer in the year to date.

The restrictions associated with Covid19 since March have led many model railroaders to get more involved with their hobby again. Also new customers could be won for this fascinating hobby.

This, combined with a good availability of goods and a stable supply of the market at home and abroad, have resulted in PIKO's sales at the end of August of + 15%, which is significantly above the sales level of the corresponding previous year and also substantially above the sales figures planned for this period.

And this extremely positive development is reflected in Germany, PIKO's largest sales territory with a 2/3 share of total sales, as well as in exports. The export business developed particularly well in the USA, where PIKO is represented by its own sales organization, in Switzerland, as well as in the directly supported foreign markets in Austria, the Netherlands, Poland and Denmark. But also in Eastern Europe, traditionally a strong market for the Sonneberg model railroad manufacturer, PIKO products are meeting with a positive response.

Due to the very attractive and extensive new product range of almost 400 new products in the four track sizes G, H0, TT and N, PIKO is confident to continue this positive development in the course of the year so far and to achieve the announced targets in 2020.

But Corona still does not pass PIKO and the model railway without leaving a trace. Due to the still very indifferent situation and especially under the aspect of protecting the health of our customers as well as the employees at PIKO, the management has decided to postpone the "Open Day" planned for June next year by one year, to June 18, 2022

PIKO owner Dr. René F. Wilfer presents the model of the garden railway engine in front of the large original. 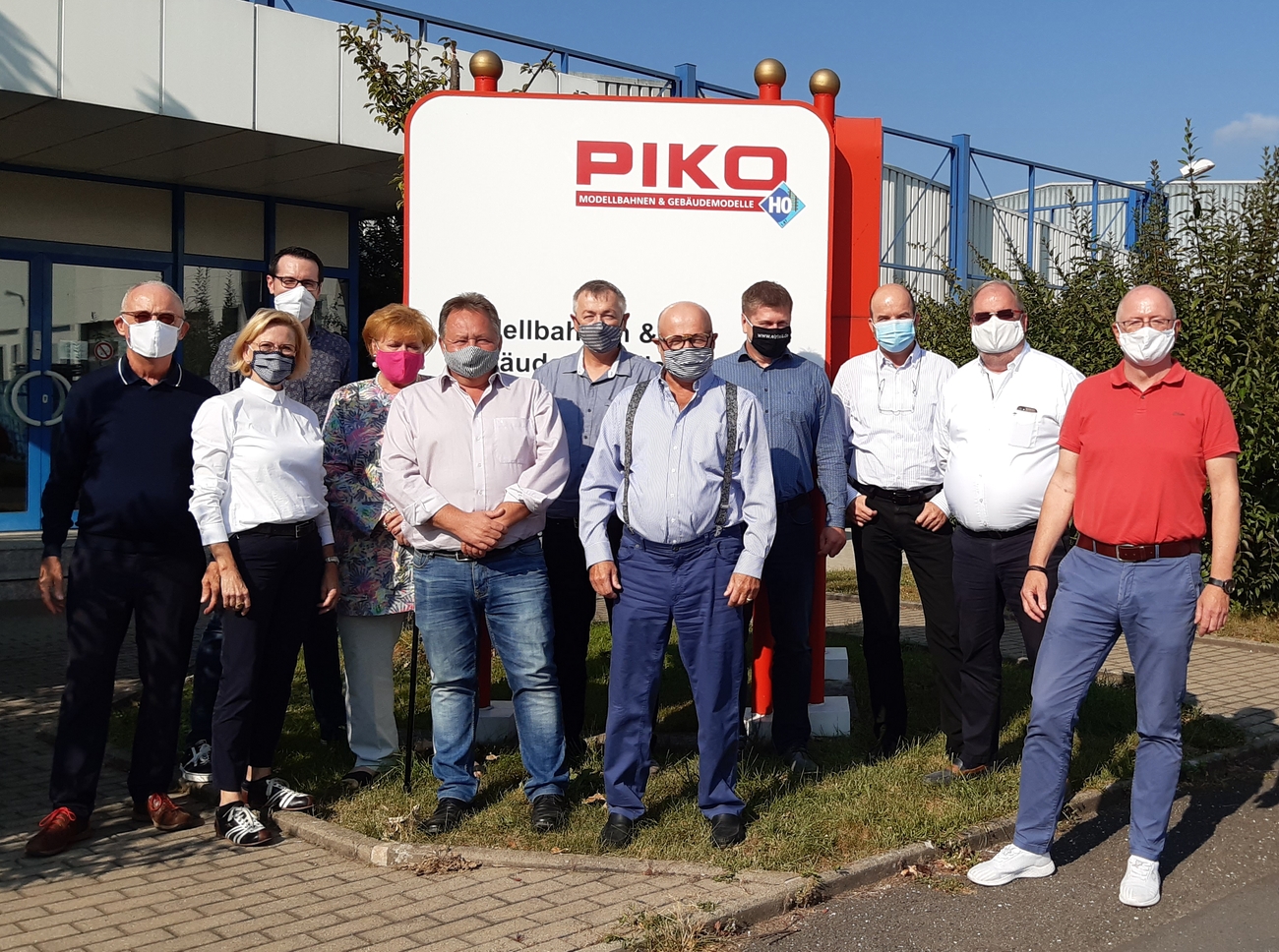 In the run-up to the roll-out, we were also able to welcome several German dealers to the PIKO factory.