During the annual press conference in the run-up to the 71st International Toy Fair in Nuremberg from January 29th to February 2nd, 2020, the management of the Sonneberg-based model train manufacturer PIKO reported on the sales development of the past year and presented the attractive new products range and the planning for 2020 to the attending media representatives.

PIKO owner, Dr. René F. Wilfer, was delighted to be able to report on a very successful 2019 at PIKO to the guests attending the press conference.

Thanks to a successful combination of attractive and high-quality new products, delivery reliability and a very good price-performance ratio, PIKO once again succeeded in exceeding the planned targets for the past year and, with an increase of +14%, was able to exceed the previous year's sales results. Thus, the positive growth of the past few years could be continued again. Under the aspect of the successful development of PIKO and due to the fact that the overall market in the model railway industry did not grow last year either, the Sonneberg model railway manufacturer was able to further strengthen and even expand its position as the third largest model railway manufacturer on the European mainland.

In Germany, the largest market for PIKO, with a sales share of 2/3 of total sales, the successful development of the past few years could be continued in 2019 with an increase of +15 % compared to the previous year.

In addition to the German specialized retail market, which continues to be the most important distribution channel and also achieved substantial growth with an increase of + 14 % over the previous year's sales, the B2C business as well as the sale of PIKO model train items to major customers in the stationary and distance selling segments also developed quite successfully in 2019.

In 2019, PIKO was able to close the year with an increase of +12% in export sales compared to the previous year and also significantly above plan.

In 2019, sales again developed especially successfully in Poland as well as in Switzerland, Italy and Hungary. PIKO was able to further increase sales and expand its market position by intensively supporting local dealers as well as through active marketing and attractive regional innovations.

In recent years, PIKO has developed into a reliable partner in the model railroad market worldwide. Both retailers and consumers reward this with their purchasing behaviour, and more and more model railroaders are becoming fans of the brand and enjoy the well-known good price-performance ratio and the outstanding quality of PIKO models in the 4 track sizes H0, Garden Railroad, N and TT, which the Thuringian model railroad manufacturer offers in its product portfolio.

An important component of this successful development was and is the good and stable supply of goods to the trade as well as the on-time delivery of the announced new products.

In addition to the production in Sonneberg, where the complete garden railroad range is manufactured, the PIKO plant in Chashan in southern China, where all N, TT and a large part of the H0 articles are manufactured, also contributed to this.

The good sales results in Germany as well as in exports led to the fact that PIKO also made a profit in 2019 and is thus well positioned to face the challenges of the model railway market in the coming years.

PIKO owner, Dr René F. Wilfer, used the press conference to present the very extensive and attractive new product package with more than 400 new products in the four track sizes G, H0, TT and N, to the media representatives present. Joining him at the press conference were Sales Director Jens Beyer, who has taken over the overall responsibility for domestic and export sales, marketing and product management starting in 2020, and Ms. Grit Hermann, who is responsible for accounting and human resources. Both were granted power of attorney from this year on.

In G scale, the largest model scale offered by PIKO, the Sonneberg-based model train manufacturer is now bringing the west German pendant to last year's Class 5035 of the DR, the impressive Class 050 of the German Bundesbahn, onto the market. Like the DR model, the Class 050 will also be available as an analogue version and as a fully equipped digital locomotive with sound, steam and moving coal load.

In addition to the new Class 050, the DR's four-axle class 106 will also be available in the garden railway segment as a new mould. Like all new constructions by PIKO, this model is based on the proven design principles for PIKO garden railway models and has a powerful drive, ball bearing and chrome-plated wheelsets, light changes depending on the direction of travel and the well-known locomotive driver. For friends of modern locomotives, PIKO is releasing the electric locomotive Taurus in Flixtrain design, which already enjoyed great popularity in the H0 range in 2019. This year, a matching passenger car in the striking green of Flixtrain will also be released to go with this garden railway locomotive. Also, in the G scale car assortment there will be some new constructions in 2020 with the 3-axle Reko passenger coaches. New in the PIKO G scale program is also a starter set with the PIKO R/C radio remote control, which was developed in exclusive cooperation with the famous "Circus Roncalli". Many new colour variations for the passenger and freight train cars are a useful addition to the garden railway assortment.

In the H0 segment, the segment with the highest sales within the PIKO portfolio, a large number of interesting new products in the digital sector and the product lines Expert Plus, Expert, Hobby, and Classic nostalgie in 1:87 scale will be released again. Furthermore, the PIKO A Track with Roadbed, which will be released in 2019, will be extended by all missing elements. Some highlights for the domestic and foreign markets were discussed in detail at today's press conference.

The highlight of the 2020 model year at PIKO is the realization of the Class 78, the first steam locomotive in the Expert program, which will be delivered both as a DB and DR version. The models will appear in the analogue versions for DC and AC layouts, as well as sound versions with factory-fitted PIKO SmartDecoder 4.1 Sound and built-in steam generator.

In the PIKO Expert line of cars, a realistic 12-part ICE 4 can now be created with the new ICE 4 extension car sets. The car sets are expected to be released in the 1st quarter of 2020.

With PKP's ET21 electric locomotive, model railroaders in Poland get another outstanding model of an important Polish locomotive series that was part of the daily appearance of the railway in our eastern neighbouring country for years.

Following the D.145 in 2019, a further striking D.141 diesel locomotive will be offered this year for the Italian market with a fine design of the bogies and exact reproduction of the many details as a form innovation.

Our Austrian neighbours can look forward with anticipation to the new model, the Era IV electric locomotive of the Rh 1044, which will appear in autumn.

For the Czech market, PIKO offers the eye-catching Class S 499 of the ČSD, a real eye-catcher for every model railway layout from the 3rd quarter of 2020.

With the new PIKO electric locomotives Re 4/4 I and several EW I car sets, model railroaders from Switzerland can look forward to contemporary models of the Swiss vehicle families, which will still be enriching installations based on the Swiss model in 2020.

For Belgium, the Era III diesel railcar Rh 553/554 of the SNCB with extremely finely engraved shapes and state-of-the-art technical equipment will be offered early in the year.

With the Eurofima express train coaches of the DB, ÖBB, FS and SBB, a newly constructed family of coaches on a precise 1:87 scale appears, which was known throughout Europe in the 1970s.

The top of the range of PIKO H0 models are the locomotives of the Expert Plus line. The finely detailed models are already equipped ex works with a modern PIKO SmartDecoder 4.1 Sound and the filigree PIKO digital coupler for trouble-free coupling and uncoupling of cars. In addition, the models have an integrated buffer memory for silky-smooth shunting movements without undesired power interruptions. After last year's first appearance of locomotives from the Expert Plus line, PIKO 2020 is now releasing three new models in this area, the red Class 260, the Class 107, and the Italian D.145, each as a DC and AC model. For model railroaders with AC systems, the much-praised PIKO measuring car will appear 2020 for the first time as an AC model with numerous innovative functions.

The year 2020 will also bring new digital products and interesting new accessories for PIKO. For example, the range of PIKO SmartDecoder 4.1 will be expanded by an unrecorded decoder with mfx capability. In addition, there will be a newly developed close coupling in current-carrying and non-current-carrying versions.

The Classic nostalgie program, the product line for collectors and model railroad enthusiasts, and the especially affordable H0 Hobby assortment also include several colour and lettering variations of well-known model series and cars in the proven PIKO quality.

In the TT scale, the Class 150 electric locomotive is the latest addition to the 1:120 scale model range. With a lot of meticulousness, the Class 150 is once again an absolutely accurate model with a love for detail. The technical features of the driver's cab and engine room lighting will convince every technology enthusiast. Among the numerous other innovations, a Taurus in the green Flixtrain design also joins the TT range.

In the PIKO N scale range, the model of the Dutch cult locomotive Rh 1100, which already excited H0 model railroaders last year, will be released in the scale of 1:160. The electric locomotive convinces with a successful design with harmonious roof curves and many lovingly designed parts, such as the fine insulators and pantographs. Technically the Rh1100 comes up with a modern Next18 interface and LED lighting. As a supplement to the new Class 221 locomotive in the shape of the 2019 locomotive, the Type 42 apron coaches will appear in N scale in DB and ÖBB versions. For Swiss model railroaders, the EW I cars will be available for the first time from PIKO in 1:160 scale in various versions.

Due to PIKO's good positioning in the retail market as well as the extensive and attractive new products for the different markets and track sizes, PIKO is planning a slight sales increase of + 3.5% plus x for 2020.

Domestic growth, fuelled by the extensive and extremely interesting novelty package, is expected to be slightly stronger at +4% than in the export sector, where we expect growth of +3%.

An overview of the complete PIKO model train assortment 2020 in the scales H0, Garden Railway, N and TT including all novelties can be found on our website www.piko.de as well as in the current catalogues for 2020, which have been available in specialized shops or directly from PIKO since the beginning of the year. 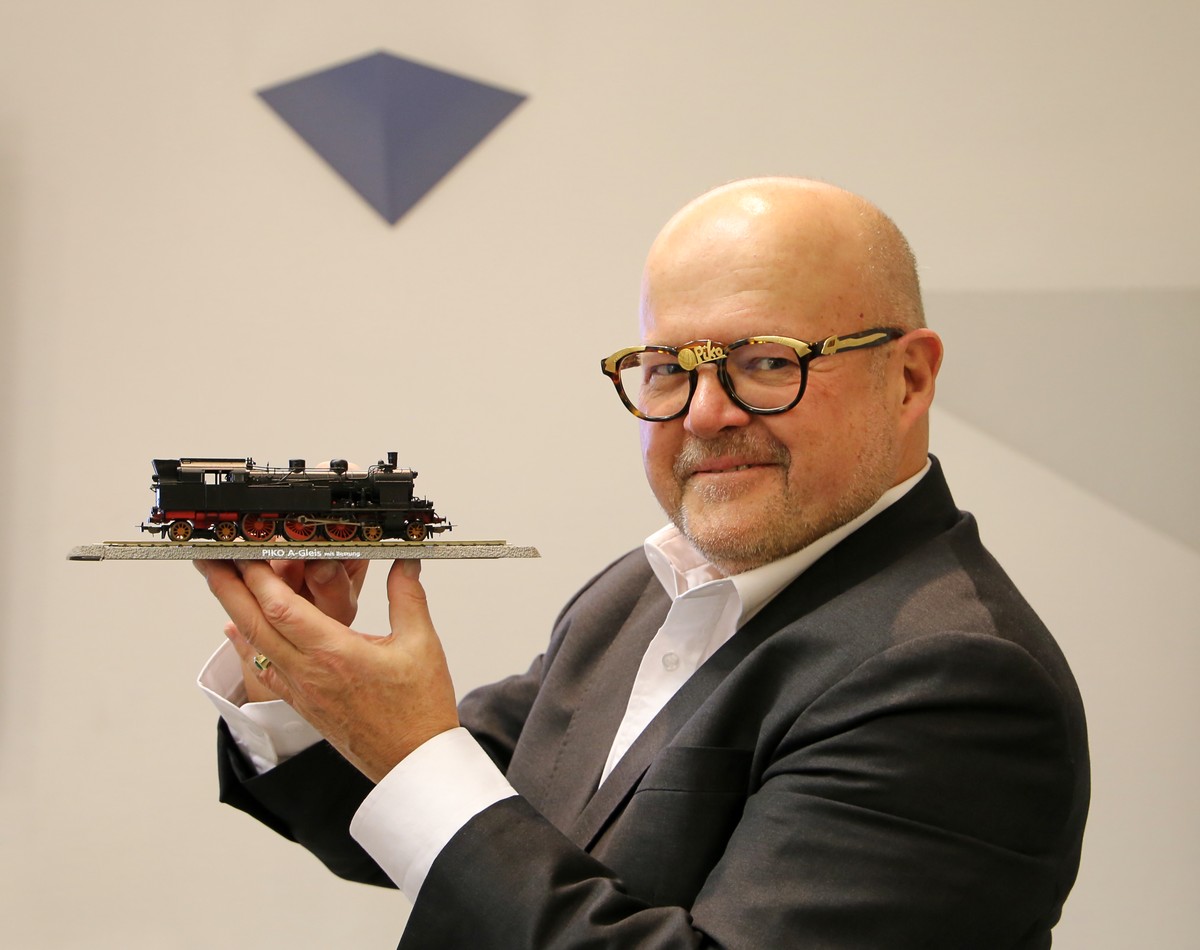 Further impressions can be found here: