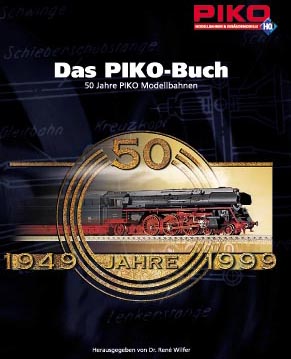 on the occasion of the 50th anniversary of PIKO model railroads,
200 pictures and illustrations, 160 pages, € 30

Dear PIKO Fan,
unfortunately there is only a German version of the PIKO Book yet. We are working on an English edition and hope it will be published soon.

The PIKO Book was written on the occasion of PIKO’s 50th anniversary. Dr. René F. Wilfer, who has been President of PIKO Spielwaren GmbH since 1992, and other authors who have always had a close relationship to PIKO model railroads tell the interesting and moving story of how the company was founded and how it became what it is now.

The book begins with the request of the Soviet military administration in Germany to produce model trains for the people living in the former Soviet zone of occupation and in other Eastern European states. This was the birth of the “PICO Express” which was presented at the Leipzig Fair in 1949.

The authors report about the changes, difficulties, and chances of the model railroad production after the German Democratic Republic was founded in 1949.

Due to a great demand for model railroads and the constantly increasing number of model railroad enthusiasts, the model train production was expanded at the beginning of the 1950s. Finally, the production base was moved from Chemnitz to Sonneberg, the Town of Toys. PICO became PIKO and soon developed and produced historic locomotives such as the E44, the BR 23, and later the BR 95, the so-called “workhorse” of the Thuringian Forest.

The book also deals with the confusion during the time of the German Unification; it depicts background information about the “privatization” of the former state owned company, and points out the economic revival after the introduction of free market economy.

The PIKO Book is full of interesting details that demonstrate an impressive period of German model railroad history illustrated by stories told by witnesses of the times and many previously unpublished pictures. The book is more than just a collection of model train photographs and a list of dates of issue.

Of course, not only PIKO’s history but also the model trains play an important role in the book. A lot of photographs illustrate the development of PIKO models that used to be improvised post war products and have become sophisticated, detailed models for demanding model railroad enthusiasts.

The book is a captivating document about the history of PIKO’s model train production that spans the time of socialist post war Germany as well as the GDR period and developments today.

We hope you will enjoy reading the book!